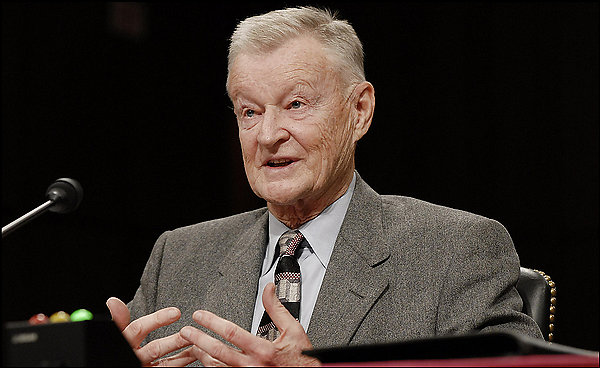 I. Who is Zbigniew Brzezinski?

It was reported in The New York Sun on February 15 that Barack Hussein Obama has chosen Zbigniew Brzezinski to advise him on Middle East policy.

Back in 1985, I wrote an article on Brzezinski for The Intercollegiate Review. Before citing some of the more relevant passages of that article, it should be borne in mind that Brzezinski, a political scientist, served as President Jimmy Carter’s national security adviser. One does not have to read Carter’s Palestine: Peace Not Apartheid to know that Carter is an anti-Semite. Brzezinski has earned the same reputation.

Not only has Brzezinski publicly defended the anti-Semitic canard that the relationship between America and Israel is the result of Jewish pressure, but he also signed a letter demanding dialogue with Hamas, whose charter calls for Israel’s destruction. It behooves us to understand the mentality of Obama’s Middle East adviser—and more deeply than our so-called experts.

Long before he became Mr. Carter’s national security adviser, Brzezinski rejected what he and most political scientists term the “black-and-white” image of the American and Soviet political systems. “This image,” he says, “is held by traditional anti-Communists.” Brzezinski thus affirmed he is not quite an anti-Communist. In fact, he deplores anti-Communism as “a relic of the Cold War, of the age of ideology.”

Not only did Brzezinski reject the “black-and-white” image of the American and Soviet forms of government, he rejects the very notion of good and bad regimes! If you are shocked by Brzezinski’s moral relativism, ponder Prime Minister Ariel Sharon’s confession in an interview with Ha’aretz in 2002 that his son Omri taught him “not to think in terms of black and white”—a statement uttered while suicide bombers were reducing Jews to body parts.

The influence of political scientists like Brzezinski is wide and deep. His moral relativism or neutrality prompts politicians to negotiate with and appease terrorist regimes. Mr. Obama may not be a moral relativist, but with Brzezinski as his adviser, he will be more disposed than other presidential candidates to appease Iran. Nor is this all.

With Brzezinski advising him, Obama’s chant about “change” may be more serious and insidious than Hillary’s silly utterances. He may have in mind changing the fundamental character of the American regime. That would fit well with the designs of one of his backers, billionaire George Soros, a globalist committed to the termination of the nation-state and the ascendancy of world government.

Since Brzezinski is a moral or historical relativism, he denies the existence of objective or transhistorical standards for determining whether the way of life of one nation, group, or individual is morally superior to that of another. (The members of the UN General Assembly would be pleased to hear this, despite the UN’s notorious record of condemning Israel without having ever condemned an Arab or Islamic terrorist state.)

Brzezinski’s relativism makes him a “weather-vane” political scientist. He urns with the winds of power; he is nothing if not “politically correct.” Working in a pluralistic and egalitarian country like America—a secular society—he conveniently adopts tolerance as his operational principle on the one hand, and equality as his primary value on the other. He is quite at home with the moral equivalency that has shaped US foreign policy toward Israel and Islamic dictatorships.

Brzezinski views history through the lens of Marxism, which, despite its atheism, has much in common with Islam. Both Communism and Islam are universalistic ideologies that reject the idea of the nation-state. Both do not regard adherence to treaties between nations as obligatory. Both Communism and Islam are militaristic and expansionist creeds that do not recognize international borders. Brzezinski’s globalism has become evident in Jimmy Carter. Under Brzezinski’s influence, Carter lowered the defense budget and pursued a soft line toward the Soviet Union. We can expect an Obama White House to pursue a very soft line toward Islam.

II. Iran’s Vision: A World Without Israel and the United States

With Zbigniew Brzezinski as his national security adviser, it was Jimmy Carter who facilitated the return of Ayatollah Khomeini to Iran. The Carter-Brzezinski axis is very much responsible for the Islamic revolution—the most dangerous revolution that has occurred in human history, a revolution that threatens the existence of every nation-state.

As a crypto-Marxist, Brzezinski deplores the nation-state. His book Between Two Ages: America’s Role in the Technetronic Era, declares that “With the splitting and eclipse of Christianity man began to worship a new deity: the nation. The nation became a mystical object claiming man’s love and loyalty. The nation-state along with the doctrine of national sovereignty fragmented humanity. It could not provide a rational framework within which the relations between nations could develop.” Brzezinski sees the nation-state as having only partly increased man’s social consciousness and only partially alleviated the human condition.

“That is why Marxism,” he contends, “represents a further vital and creative stage in the maturing and man’s universal vision.” Marxism, he says, “was the most powerful doctrine for generating a universal and secular human consciousness.” Embodied in the Soviet Union, however, Communism became the dogma of a party and, under Stalin, “was wedded to Russian nationalism.”

Although Brzezinski poses as a humanist, he makes a most inhumane statement by saying that: “although Stalinism may have been a needless tragedy, for both the Russian people and Communism as an ideal, there is the intellectually tantalizing possibility that for the world at large it was … a blessing in disguise.” Ponder this shocking statement about Islam or of Islamic imperialism. Yes, it slaughtered more than 200 million people, but Islam brought hundreds of Christian, Jewish, Zoroastrian, Hindu, and Buddhist communities under a single universal vision, that of the Quran.

Brzezinski, a self-professed secularist, is an internationalist whose moral relativism contradicts the moral law or natural rights doctrine of America’s Declaration of Independence. His relativism and internationalism contradict the teachings of the America’s Founding Fathers, who endowed the United States with a national identity and character, the same that animated Abraham Lincoln and Theodore Roosevelt. To put it more bluntly: Brzezinski’s mode of thought or political mentality—like that of countless other American academics—is anti-American. An Obama-Brzezinski axis has revolutionary significance. It might accelerate the de-Americanization and decline of the United States.

This development has its parallel in the de-Judaizing of Israel’s Third Commonwealth. Israel’s ruling elites, beginning with President Shimon Peres, Prime Minister Ehud Olmert, Foreign Minister Tzipi Livini, Education Minister Yuli Tamir—and let’s not forget Israel’s erstwhile and still influential Supreme Court president Aaron Barak—have the same basic mentality as Brzezinski. The mere fact that they are multiculturalists committed to transforming Israel into “a state of its citizens” means that they are only nominal Jews, that just as Brzezinski is, in principle, anti-American, so they are, in principle, anti-Israel or anti-Jewish!

Israel is the target of all those who oppose the nation-state if only because the Bible of Israel not only prescribes a multiplicity of nations, but a moral code that contradicts the moral relativism of the Brzezinskis and of Israel’s ruling elites.

Will Israel be the target of “change”—the mantra of the Democratic Party chanted most ominously by Barack Hussein Obama?

The Foundation for Constitutional Democracy » Rockets From Gaza: Facts and Figures

The Two-State Solution: A Sacrifice of the Intellect