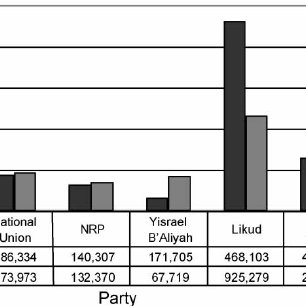 As you well know, we are approaching a momentous election, the outcome of which may affect Israel’s territorial integrity and survival as a Jewish state.

You all know that National Union (NU) and the National Religious Party (NRP) signed the Sharon government’s March 2003 guidelines, which committed the signatories to the Oslo Agreement and all agreements related thereto. By so doing, NU and NRP doomed Gush Katif.

Both parties propped up the government even while Sharon was preparing the IDF to dispossess and deport 10,000 Jews from Gaza and northern Samaria. NU and NRP’s excuse—“we can accomplish more from within”—was poppycock. They failed to prevent the monstrous crime perpetrated against those 10,000 Jews.

Instead of resigning from their parties and making room for a new leadership, NU and NRP chairmen Benny Elon and Zevulun Orlev held on to their treasured Knesset seats; and now they want you to help them retain their seats by voting for them on March 28.

Although I believe it would be a mistake to do so, let me present a more interesting scenario.

1. Suppose enough voters, despite their misgivings about the nationalist credentials of NU and NRP, give their joint list 11 seats. Yes, many of these voters would prefer The Jewish National Alliance, because they know that men like Baruch Marzel (Hazit) and Professor Israel Hanukoglu (Yamin Israel) will not compromise on Eretz Israel, that unlike Benny Elon (NU) and Zevulun Orlev (NRP), they not only oppose any further territorial withdrawals, but also any referendum on that issue—if only because “No people have a right to do what is wrong.”

2. The trouble is that these reluctant NU/NRP voters, although they really prefer Hazit, have fallen for the myth about “not wasting your votes on a small party.” But as I have elsewhere explained, given Israel’s system of proportional representation, so-called “wasted votes” are only a small part of the total votes cast in an election. And though it’s not mathematically impossible, it’s statistically improbable that those “wasted votes” would give any party an additional seat. (This holds despite “surplus” votes and “shared” votes.)

4. As others have now decided, I think you will switch to Hazit [ כ ].

An Urgent Message to Supporters of NU/NRP

Shimon Peres and the Betrayal of Israel

Campaign to Save Jerusalem, the Capital of Israel