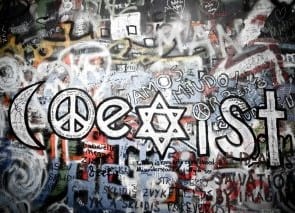 Today’s report is based on my forthcoming book, Toward a Renaissance of Israel and America. The subtitle is The Political Theology of Rabbi Eliyahu Benamozegh.

Unlike Christianity and Islam, Judaism unites Particularism and Universalism. This unique quality of Judaism is developed in depth by the Italian Rabbi Eliyahu Benamozegh, a philosopher and theologian whose magnum opus, Israel and Humanity, was posthumously published in 1914.

To begin with, Rabbi Benamozegh mentions some of the ethnic and parochial aspects of the Mosaic law, such as those that depend on the seasons and geography of Eretz Israel. For example, the Passover is linked to the Israel spring, and the Great Sanhedrin can only function on the Temple Mount in Jerusalem.

Moreover, God promises that He will establish His dwelling place in Eretz Israel, where the Jews would obtain salvation. But what about the salvation of the Gentiles, who are also created in the image of God? Benamozegh answers:

If there were no way to salvation available to Gentiles outside the Mosaic Law, we should expect to see in Judaism a much more pronounced tendency to proselytism, and not only a peaceful proselytism which exhorts more by means of the word than by act, and still more by example than by word, but also an ardent proselytism of conquest, which would never tire or promising eternal damnation [as in Christianity and Islam] to all who fail to convert to the only true religion. What we find, however, is something radically different. The cautious reserve with which Israel addresses the Gentiles is incompatible with the conviction that it alone possesses the means of salvation. Its respect for other beliefs may seem even to verge on indifference …

Of course, Israel, the bearer of ethical monotheism, cannot be indifferent to other beliefs. Its ethical monotheism is intimately linked to man’s creation in the image of God, that concept of Holy Writ which allows us to speak of the idea of the human community. In fact, says Rabbi Samson Raphael Hirsch, “Jews are told to deal more honestly and fairly with non-Jews. A wrong committed against a fellow-Jew is an ordinary sin, but a wrong committed against a non-Jew is in addition the capital sin of profaning the name of God, the sanctification of which is Israel’s mission and destiny …”

The liberality of Mosaism stands in stark contrast with prejudices about Jewish parochialism. On the one hand, says Benamozegh, the “local, ethnic quality of Mosaism and its nearly total absence of organized proselytism are ample proof that the religion of Israel is not destined to become the universal religion.” On the other hand, “Israel insists on declaring that certain general principles are obligatory for every human creature, a code of laws that cannot be evaded with impunity, whose observance is required by divine justice.” Benamozegh then asks: “Can we doubt that Israel believes itself in possession of a religion which is universal in a way [complete] Mosaism is not, a religion whose basic substance appears even in Scriptures? Can there be any doubt that here is that other aspect of the Law, which addresses all men and all epochs [namely, the Noahide laws]?

Foundation Blog, to illustrate, consider the Temple Mount, whose significance is inseparable from Jerusalem. The site had been sanctified since the time of Abraham:

HaShem said to Abram, “Go for yourself from your land, from your relatives, and you’re your father’s house to the land that I will show you. And I will make of you a great nation; I will bless you, and make your name great, and you shall be a blessing. I will bless those who bless you; and him who curses you I will curse; and all the families of the earth shall bless themselves by you” (Gen. 12:1-3).

This commandment bespeaks the origin of a world-historical mission, one that unites a spiritual individualism and a spiritual universalism. Required for this mission is a special people situated on a holy land. The land that I will show you has gradations of holiness but most concentrated in Jerusalem and the Temple Mount, where the Shekhina or Divine Presence rests and is sanctified for eternity. In the political theology of Judaism, the Temple Mount is the avis mundi, the exact point at which the terrestrial and the heavenly conjoin. There King David established his capital; there his son Solomon built the First Temple.

Nevertheless, in one respect the Temple Mount is of greater significance to the Gentile world than it is to Israel. Listen to the voice of Israel speaking through its leaders, the disparaged Pharisees regarding the sacrifices of seventy calves during the eight days of Sukkot, the Feast of Tabernacles, and note their magnanimity and humanitarianism.

Leviticus Rabbah says: “If the nations of the world had known how useful the Temple was to them, they would have surrounded it with fortified camps to protect it, for it was more useful to them than to Israel.”

“Your eyes are like doves” means that just as the dove (offered at the Temple) atones for everyone, so Israel atones for all peoples. For the seventy calves which were burned at the altar at the Feast of Tabernacles were offered on behalf of the nations, in order that their existence might be maintained in this world, which is why it is written in (Psalms 109:4), “In return for my love they laid obstacles in my path, yet I pray for them.”

In the treatise Sukkot in the Talmud, we encounter a similar passage: Rabbi Jochanan says, “Woe to the Gentiles for what they have lost (in losing the Temple). For when the Temple was standing, atonement was made for them on the altar (by means of the seventy calves offered in sacrifice). But now how will they atone?”

Finally, hear the words of another Jewish Sage, Rabbi Pinchas, who said: “All the seventy bullocks which Israel sacrificed during Sukkot were on behalf of the seventy nations of the world, that they might not perish for their sins.”

The sins the Sages have in mind are violations of the Seven Noahide Laws of Universal Morality, binding on all human beings, Jews and Gentiles alike. Rabbi Benamozegh states the position of Mosaism, that the Seven Noahide Laws are essential to the existence of human society. Therefore, anyone that violates these laws is an enemy of mankind and may forfeit his freedom and even his life. This applies to nations steeped in polytheism and paganism. Indeed, no nation can long endure, or remain at peace with other nations, in the absence of the Noahide Laws. Hugo Grotius (1583–1645), the Dutch jurist who laid the moral foundations for international law, often cited the Noahide Laws as an early source of international law. Aaron Lichtenstein has shown that the Noahide Laws are actually general categories which involve no less than 66 of the 613 basic laws of the Torah codified by Maimonides. Here you can find more about Judaism politics.

The Noahide Laws are rooted in ethical monotheism. Six prohibit blasphemy, murder, stealing, sexual immorality, and cruelty to animals. The seventh mandates the establishment of courts of justice to try violations of those six prohibitions.

The Noahide Laws of Universal Morality may be called a “Genial Orthodoxy.” This genial orthodoxy transcends the social and economic distinctions among men. It holds all men equal before the law. It places constraints on governors and governed alike and habituates men to the rule of law. It subordinates to the rule of law any ethnic or racial differences that may exist among the groups composing a society. It moderates their demands and facilitates coordination of their diverse interests and talents. In short, this Hebraic orthodoxy conduces to social harmony and happiness, to progress and prosperity.

The Noahide Laws can be elaborated in various ways and are therefore applicable to the variety of nations comprising mankind. Israel’s world-historical function, therefore, is to provide mankind the example of a nation that unites particularism and cosmopolitanism, which it can only do as a nation consecrated to God. By affirming a plurality of nations, and by qualifying this particularism with laws of universal morality, Israel avoids cultural relativism as well as the political and religious imperialism of Islam that once animated Christianity.

From Martin Buber to Michael Oren

A Brief Political Glossary for Israelis and Immigrants